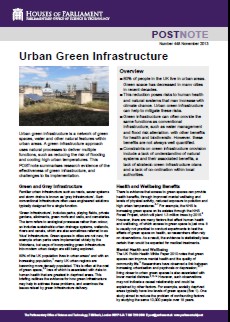 I’m not sure if the concept of synchronicity tells us a lot about the deeper workings of the universe; but perhaps it tells us a lot about the way we humans get a handle on the chaos of reality by finding patterns and meaning everywhere. Even so it was hard for me not make a connection, when as I was getting to grips with an urban environmental infrastructure project the CIEEM policy briefing arrived in my inbox with a link to a POST paper on Urban Green Infrastructure. Obviously someone in Westminster had noticed what I was doing and decided to help out with a bit of background research. POST is the Parliamentary Office for Science and Technology, a politically independent body set up to advise both houses of parliament.

Perhaps it isn’t that much of a coincidence, though. A quarter of a century ago (ouch!) I attended a Fairbrother Group conference in Newport. It was something of a revelation for me to discover the breadth and scope of the Urban Wildlife movement – still less than a decade old, there was much energy and enthusiasm and the energy that comes from the early diversity of ideas. Since those days, the group became the Urban Wildlife Partnership and saw urban conservation become mainstream. For many years I was working right in the middle of that stream and saw how the ideas and concepts of urban conservation came together with those of more traditional conservation. The culmination was with the landscape-scale approach to conservation. Once you think about wildlife and greenspace at a landscape scale, you haven’t got landowners, tenants and visitors. Suddenly you have whole communities to deal with. This was a reality for the urban conservationists from the beginning, and their expertise in education, engagement and, vitally, consultation and partnership building was needed. Indeed working at a landscape scale, such skills matter as much as those in ecology and land management.

Is it a coincidence that the Urban Wildlife Network (as it finally became) wound up, claiming ‘our work here now, is done’ more or less as the ‘Lawton Report’ was being published? The POST paper on green infrastructure is more evidence that urban conservationists are not just ‘guerrilla gardeners’ but are solidly part of the mainstream. It’s good news if we want a cleaner, healthier, more diverse landscape in our cities and towns.

On the down side, of course, there is always the danger that mainstream can mean mediocre. That said, looking around I see plenty of examples of the exciting and the innovative. I hope to highlight some such as this blog develops, although I’m sure it will wander far and wide. Hopefully I will prove that urban wildlife is just as exciting now, as it was in the 1980s.